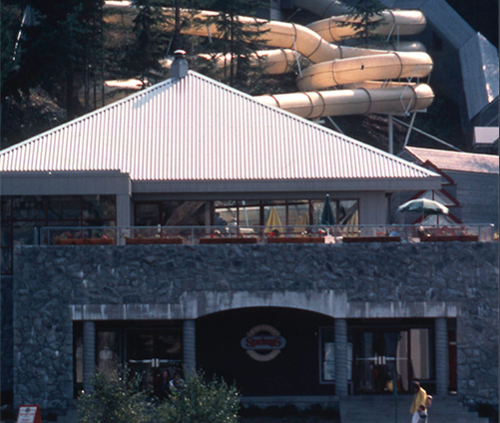 What makes you think of Whistler?

When you think of our world-famous ski resort the images that probably come to your mind are snow-peaked mountains, warm fires, and cozy alpine log cabins. Your mind may even go to a relaxing sauna or Aprés in a hot tub,  you might think of many things but it’s unlikely that you think of waterslides. However, in the years 1985-1991, Whistler was well known for having two large waterslides. In this blog post, we will explore Whistler’s history and possibilities for future waterslides.

The History of our Waterslide’s

Walking through Whistler Village today, it may be hard to picture two large tandem waterslides on the mountain. The waterslides were proposed in 1983 as part of a project to market Whistler as an all-seasons resort for skiers and non-skiers alike. The proposal was almost immediately met with controversy from neighboring business owners and residents. The “Whistler Springs” waterslides project faced backlash over concerns of aesthetics and noise.

The original plans featured a juice bar, spas, and restaurant, a spiral staircase would lead guests to a sundeck and observation level. Due to pushback from the community, the plans needed many modifications and the project took two years to complete.

Finally, on August 23rd, 1985 Whistler’s first waterslides were open to the public. Locals and visitors lined up to test the new features and it was quickly noted that the right slide was slightly steeper and faster than the left.

The slides were a hit with children & ski camp goers, as well as adults. Whistler used the slides for many advertisements over the next few years. Some guests complained of being cold on the walk from the pool to the top of the stairs.

Over time, the slides lost their appeal to tourists, and the Whistler Springs waterslides were closed in 1991. The restaurant upstairs became offices and the slides were removed. The area that the slides had been was purchased by the Westin hotel. The only reminder that it ever existed there remains in the name of the Whistler Blackcomb staff services building “The Springs”.

Will Whistler slide into the Future?

While it is unlikely that Whistler will ever rebuild its waterslides, there may be hope for a future solution. The $345 Million dollars “Renaissance plan” that was developed with the merging of Whistler and Blackcomb resort, featured a similar project. The “Watershed” a large and ambitious indoor waterpark was planned to include slides, a surf zone, a kids’ splash area, cliff jumping, and hot and cold pools would have been awesome. The building was also to feature a family entertainment center, cafe and concessions, and an eight-lane bowling alley.

When Vail bought out Whistler Blackcomb the idea was benched for the time being in order to focus on-mountain improvements and expansion but the plans have not been dismissed entirely. Will we develop a waterpark in the future?

I think it would be great to bring in more families during the shoulder season and I have my fingers crossed! Do you support a Whistler waterpark?

A special thanks to Pique magazine, the Whistler Museum, and the Whistler archives for providing most of the source material in this article.